Tips For Adulthood: Five Reasons To Join A Book Club 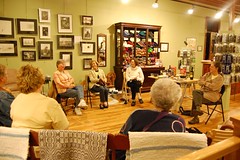 I’ve been thinking a lot about book clubs lately.

It started when I read this vaguely dismissive piece in the New York Times about why reading has become “too social” and should remain a fundamentally private experience.

Then I read Kristen’s post over on Motherese yesterday about the sheer variety of book club experiences out there and her uncertainty as to what she’s meant to get out of them anyway.

I can relate to both points of view. I’ve been in several book clubs over the course of my adult life and they’ve all been quite different from one another. At times, I’ve been quite frustrated by these clubs, whether because people came to the meeting not having finished the book (gasp) or because they chose titles that I thought were too…cheesy. (For a great spoof on the potential shallowness of book clubs, see this New Yorker piece.)

I’ve since reformed my ways and come to see that you go to book clubs for lots of different reasons, and it’s best to just chill out and lower your expectations.

And so, as a reformed book club snob (Yes, Katy, that’s my definition!), let me offer five reasons that I think it’s a good idea to join a book club:

1. You meet interesting people. IMHO, the trick is not to join a book club full of your best friends. Some people do that and absolutely love it. But I find book clubs more interesting when none of my close friends are in them. After all, I’ll probably end up talking about books with my close friends anyway. But I’ll learn more from drawing upon a wider range of individuals. My current book club is composed of a bunch of women I almost never see (except occasionally on the street) and that’s precisely why I like it. It features – among others – a midwife, an entrepreneur, a SAHM and an urban planner. These ladies hail from all over the world. So in addition to gaining their quite distinct takes on the book at hand, I also gain a window into their lives, which are so very different from my own.

2. You read things that you wouldn’t otherwise read. Which ties to point #1, because people who are outside of your immediate circle of friends are more likely to have literary tastes that differ from your own. For example, I just read Stieg Larson’s The Girl With The Dragon Tattoo. It’s a thriller set in Sweden with loads of sex and violence and family sagas. Though I’m still not convinced that it’s a great “book group” book (see point #3), it was a terrific read and I absolutely devoured it. But I never would have gone near it with a ten foot pole had it not been for book club.

3. Some books need to be discussed. This gets back to the New York Times article and the idea that reading should (arguably) remain a private pursuit (although, to be fair, the author of that article acknowledges that some particularly difficult books demand discussion.) A case in point: José Saramago’s Blindness, which I also just read in my book club. Wow! What an amazing novel. It totally changed the way that I think about fiction. But what was it about? Clearly, it was an allegory of some sort. But for what? Authoritarian rule? Religion? Capitalism? All of the above? We all had different ideas about what this great book “meant” and I felt like I understood it so much better having talked about it.

4. You eat great food. Most book groups entail some sort of snack alongside them, and usually – let’s be honest – some alcohol. I had grown accustomed to the standard wine/cheese/grapes fare at my old book club in Chicago, and that suited me fine. But, boy did they up the ante when we moved to London. One of my hostesses is Swedish, and she regularly prepares Swedish mulled wine – appropriately named Glögg – as well as Swedish apple tarts whenever we meet at her home. Yum!

5. Sometimes it’s fun just to chat. Finally – all book clubs – no matter how serious, entail some chit chat. And that’s just how it should be. Whether or not you’re in one that’s all-women – as seems to be the norm – or contains “the male element” (as someone ominously referred to men recently…yikes! sounds contagious!) we all thrive on friendship as we grow older. And book clubs are a great excuse to make and keep friends.

I was delighted to get this shout-out on the fabulous Alpha Mummy blog in London today for my recent piece on peanut allergies.

I’m over on PoliticsDaily.com today talking about why I think Nicaragua’s abortion ban is inhumane and backward. (But other than that, I think it’s really great…) Have a look.

Image: My Book Group Met At A Knit Shop by ellenmac11 via Flickr under a Creative Commons License.