Tips For Adulthood: Five Reasons To Clear Out Your Inbox

Tips For Adulthood: Five Reasons To Clear Out Your InboxdelialloydJuly 7, 2010March 15, 2021 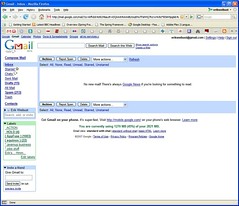 Every week I offer tips for adulthood.

As many of you know, I recently moved house. And in the process of tossing out assorted long-dormant items like my son’s erstwhile Playmobil castle and the fish poacher that was serving as a spice rack, I realized that I shouldn’t limit my decluttering to actual stuff. It was also time to do a virtual declutter.

As I’ve said before, I’m not one of those die-hard Inbox Zero types. I’ve come to accept that there will always be a certain base level of flotsam cluttering up my inbox. Otherwise, I’d do nothing but eliminate emails all day long.

But there comes a time – and everyone has a different threshold – when you just can’t bear to look at your inbox splitting at the seams anymore. For me, it was when my inbox went over 1000 messages. (I won’t tell you how much over or you might gasp.) And I knew that it was time to get our my virtual hacksaw and start chopping.

If you’re like me, you probably dread the idea of sitting down and going through your inbox. Maybe there’s stuff in there that you’re trying to avoid. Or you fear that by managing your inbox, you will necessarily *not* be doing something else with your time. Or maybe the whole task is just too daunting.

But today’s post is meant to help you see that by setting aside time to clear out your inbox, you’ll actually feel calmer *and* more productive. Here’s why:

1. You get ideas. I’ve posted before about how I come up with ideas, whether it’s taking a “thinking shower” or going outside for a walk. When I get those ideas, I usually write them down in a little notebook I carry around that’s precisely for that purpose. But sometimes – and especially if it’s an idea that I plan to save for a later date – I write myself an email about the idea with the thought of subsequently storing it in a file on my computer. Except that sometimes I never actually complete that second step. And so the idea – which has subsequently gone completely out of my mind – is essentially lost, drowning in the sea that is my inbox until I find the time (which could be weeks, even months) to rescue it. Clearing out your inbox reminds you of those little gems that are hiding in the recesses of your brain.

2. You take action. And once you’ve been reminded of that cure for cancer you came up with while jogging one Thursday afternoon back in March, you might actually be inspired to do something about it. In my case, my virtual decluttering prompted me to send off an essay I’d written (gulp) 18 months ago to a major media outlet and also to get in touch with an agent I’d flagged but never actually contacted. Those were both things I’d been meaning to do for ages. But until I happened upon those items in my inbox, I completely forgot that they were even on my to-do list.

3. You reconnect with people. Just as the decluttering entailed in moving house reminds you of important people from your past, so too does scrubbing out your inbox remind you of friends and relationships that matter. I just found an email that was several months old from a friend of mine who moved to Colorado last year. In it, she not only brought me up to speed on what she’s been up to, but sent me an article about her new employer that reminded me – in turn – of an idea I’d been meaning to write about (Twofer! See #1). Another email from an old friend reminded me that his father had passed away. While I’d already sent my friend a condolence letter, I now remembered that I’d wanted to send his mother one as well.

5. You relax. And this is perhaps the greatest benefit of all. There’s nothing quite like a good, old-fashioned declutter, whether real or virtual. It takes years off your life…removes pounds from your body…lifts scales from your skin. (O.K., I”m mixing metaphors a bit but you get my drift.) Short of doing yoga, there’s really nothing quite so soothing.

Image: Inbox Zero by eweibust via Flickr under a Creative Commons License.

Because I've conditioned myself to the expectation of working on weekends, I now feel guilty...