Tips For Adulthood: Five Signs You're Working Too Hard

Tips For Adulthood: Five Signs You're Working Too HarddelialloydOctober 6, 2010March 15, 2021 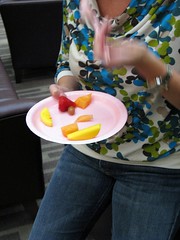 Sometimes it’s the off-hand comment that really gets you thinking.

So there I was in the playground yesterday, about to pick my daughter up from school, when I started talking to a friend who was also waiting for her son. We were midway into a vague, “How’s it goin’?” sort of chat, when she suddenly commented, seemingly out of nowhere: “You seem so busy. Do you ever eat lunch?”

I laughed, reassuring her that I did, even while suppressing the memory of stuffing a peanut butter and jelly sandwich into my mouth but two hours earlier as I galloped up a hill towards a bi-monthly appointment with my life coach (whom I see to help me…relax.)

But it gets better. As we talked some more about my work schedule, my double-school-run-afternoons and my husband’s recent business travel, she asked – in all seriousness – “Do you ever watch TV?”

She meant it in the nicest way, of course. She’s a really nice person. But, still, it cut me like a knife.

I mean: Do I ever watch TV? Am I so busy that the image I now project is that of a pop-culture-bereft, ready-meal-popping freak show who zips around North London on her collapsible bicycle desperately trying to keep up with her life? (Don’t answer that question. And by the way, does falling asleep to the Director’s Cut of Pride and Prejudice count as “watching TV”?)

So I gave it some thought. And I realized that I have been working too hard lately and trying to do too much. And I really need to relax. Here are five other tell-tale signs that you need to take a break:

1. Strangers tell you that you look rushed. It’s one thing when a friend tells you that you seem over-worked. But when even a stranger expresses concern that you’re too busy, it’s really time to take note. I was in the pharmacy the other day – where, because of the multitude of medical problems afflicting my family – the pharmacists are basically my extended family. Again, seemingly out of nowhere, the owner of the shop stepped forward and observed: “You always seem to be in a rush.” (“Why do you say that?” I wanted to reply. “Because I just knocked 42 of your contact lens solutions on the floor when I whooshed in here to grab my prescription while – literally – jogging?”) Once again, she meant it in the nicest way. This lady brings the descriptor “kindly” to a whole new level. And that made her remark all the more telling.

2. Muscle pain migrates to new corners of your body. Remember my piriformis syndrome? Thought I had that licked, didn’t you? Nope. It’s back. Only it has inexplicably migrated to the left side of my body. As soon as the pain started about six weeks ago, I recognized the symptoms instantly. And for a while, I ignored it. (Even though you should never ignore pain. You heard it here first.) But you know it’s time to cut back on what you’re doing when your body is basically screaming: “Hey! Pay Attention to Me!”

3. You feel relieved when you *have* to read your favorite magazine. I love The New Yorker. But despite my Sabbath Saturday resolve to devote more time to reading this magazine, I’ve fallen off the wagon. There are three – quite possibly, four – issues sitting in my magazine rack as we speak. One day last week, I found myself waiting for one of my kids for an hour with nothing to do but read my New Yorker. And I felt…relieved. As in: “Thank goodness this hour presented itself miraculously in my life!” Not as in: “Gee, I love the New Yorker and I think I’ll spend an hour reading it this afternoon because I want to.” What’s wrong with this picture?

4. You mistake tragedy for comedy. I love Indie films. The bleaker, the better. So when I recommended Winter’s Bone to some friends recently, I was puzzled when one of them, while passing me on the school run, shouted out: “Hey, thanks for the movie recommendation. We had a lovely evening. But it was a bit…grim, no?” To which I responded: “Grim? Really? I found it kind of uplifting.” When I recounted this exchange to my husband later that evening, he looked at me as if I were smoking crack. Like me, he also loved the movie. But “uplifting”? To paraphrase his reaction, when you mix poverty, drugs, murder and rural American sub-cultures, that’s not generally characterized as “uplifting.” Just sayin’.

5. You read Nora Ephron. I like my books much like I prefer my movies: heavy and (often) dark. (For me, the Dragon Tattoo series constitutes “light.”) So when my book club chose Nora Ephron’s Heartburn as its selection this month, I was initially disappointed. Not my cuppa, as they say. Boy, was I wrong. It’s not a great novel by any stretch. In fact, it’s not so much a novel as an extended rant by Ephron against her ex-husband for cheating on her when she was seven months pregnant. (And who can blame her?) But, man is Ephron funny. She has a terrific voice. And sometimes, we all just need to laugh.

Fortunately, I will have a chance to take a break later this month when I travel with my family – and my mother – to Berlin, one of those European cities I’ve always wanted to visit. Let’s just hope that whole terrorist threat thing has lifted by then. Speaking of grim…

I was very grateful for this shout-out on the New York Times Freakonomics blog for my recent piece on health care reform in the U.K.

Image: Eat On The Run by Brave Heart via Flickr under a Creative Commons license.

I love my job. But I'm not going enjoy this new life I've built for...