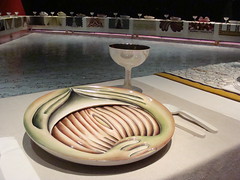 Once, when I was just out of college and living with three friends in Washington, DC, I told one of my friend’s mothers that my roommates and I were going to throw a party.

I paused, unsure how to answer.

While I still love beer, I do believe that one of the hallmarks of adulthood is leaving the phase where beer and (if you’re lucky) chips will do and stepping things up a notch to more grown-up fare.

Which isn’t to say it’s easy. Although I resolved earlier this year to have people over to our house more often (and made good on that promise), it’s taken me a while to figure out how to entertain without finding it stressful. Because even though I’m fairly far out there on the extrovert spectrum, it does make me anxious to have to organise a meal for anyone other than my family.

Lately, however, I’ve noticed that things have gotten easier in that department. Here’s what I’ve learned:

1. Less is more. As with so many things in life, less proves to be more. Once upon a time – partly for efficiency reasons (“I’m cooking anyway“)  and partly because I’ve always subscribed to the “the more, the merrier” school of thought -I would routinely have dinner parties of eight or more. Among other things, it just seemed more sociable. These days, in contrast, six is my maximum. And increasingly, having just one couple over is becoming the norm in our household. Not only is it a lot less work, but when you keep a dinner party small, you can actually talk to your guests and…egads!…listen to what they have to say. Try it. It turns out that having fewer people over to dinner is actually more fun.

2. Clear the decks. For a long time, I thought that the reason I found entertaining stressful was because I hated to cook. Turns out, I don’t hate to cook. I even, on occasion, find it therapeutic. What I found stressful was not having enough counter space to prepare the dishes. So while I was getting ready for the dinner party, I’d constantly feel like the party itself was closing in on me. It helps to have a large kitchen if you want to feel less hemmed in. But let’s face it, I live in London so that’s not happening. But even if you don’t have a large kitchen, if you can somehow manage to clear the counters of clutter before you start cooking – so that your cookbook (see below) isn’t balanced precariously on top of your mixing bowl – you’ll find that the whole thing is much more enjoyable, if not artful!

3. Get a good cook book. I’ve always admired my friends who could just stare at a bunch of random ingredients and whip up something delicious. But that’s just not me. Nor will it ever be. I have learned, however, the value of a good cook book over time. Having a few recipes which you know are a. doable and b. tasty takes a ton of stress out of meal preparation. A few years back, a friend of mine gave me a cookbook called How To Cook For Food Allergies, because of my son’s multiple food allergies. I cracked this book open one day and realized that it was a gold mine – not so much for him (he really doesn’t care what he eats), but for me. It’s chock full of absolutely fantastic, healthy recipes and I’ve been using it as my staple ever since.

4. Practice meals in advance. This ought to be a no-brainer, but I’ve been burnt before on many an occasion so I thought I’d share it with you. Unless you’re super-confident in the kitchen (and I think I can safely say that I’m not), you do not want your dinner party to be the first time that you try out a new dish. Rather, once you identify a meal that sounds promising, try it out on your family and/or spouse first and see how it fares. Sometimes things that sound great are real duds. Trust me.

5. Don’t make dessert. I love dessert. In fact, it’s my favorite part of the meal. But when you’re pressed, it’s hard to find time to prepare appetizers, entrées and desserts for 4-6 people. So even though I don’t mind baking, I usually buy my desserts in advance so that I don’t have that extra task hanging over me before a dinner party. Takes the pressure off.

How about you? What are your secrets for making entertaining less stressful and more fun?

Image: The Dinner Party by mapgirl271 via Flickr under a Creative Commons license.