Tips For Adulthood: Five Reasons You Should Watch The BBC

Tips For Adulthood: Five Reasons You Should Watch The BBCdelialloydFebruary 10, 2010March 15, 2021 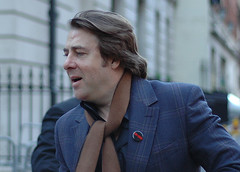 Awhile back, I posted on five reasons you should listen to BBC Radio. Today I’d like to complement that post with some thoughts on why you should also watch BBC television:

1. It has the most amazing mini-series. Back when my husband and I first met, I knew that we were well-suited to one another when we both dove in with two feet to watch the six part BBC mini-series Reckless, about a young man who falls for an older (married) woman. A few years later, we watched State of Play, a contemporary thriller about a political-media scandal (later re-made into a less satisfactory feature film set in America.) Just this past weekend, we finished the trilogy House of Cards, a political drama about Westminster intrigue set in post-Thatcher England. All three series combine superb acting, fine writing and a willingness to explore the messy interface between love and power. Fabulous.

2. It has the most amazing documentaries. I’ve got a 9-year-old son, which means that prying him away from violent computer games is no mean feat. But I can’t tell you how many spellbinding afternoons we’ve spent this year watching the most compelling documentaries about science and nature on the BBC I-player. I’m particularly taken with the series How Earth Made Us. Watch this one entitled Deep Earth to learn why civilizations sprung up along fault lines. Incredible.

3. The presenters look like us. Despite charges of ageism and sexism, the vast majority of the people presenting and reporting the news on the BBC just aren’t all that attractive, at least by American broadcast standards. Rather, they look like – gasp – normal people. At first, I found this shocking and vaguely disconcerting. (What’s up with that guy’s teeth? How can she possibly go on air in that top?) But now that I’ve gotten used to it, I find it quite refreshing. The people who report the news look a lot like the people they’re reporting on. How…appropriate.

4. It Employs Jonathan Ross. At least for now. If you’re *so* over the late night television wars in the United States, I’d urge you to tune in to this weekend staple over here in the UK: Friday Night with Jonathan Ross. Yeah, he looks a bit like Leno and – at first glance – acts a bit like him, with his bumptious grin and easy way with the ladies. But make no mistake. Ross is clever and funny and seems to really enjoy what he’s doing. (Even if he occasionally steps over the line.) I’ve never watched late night TV with any regularity in my life until now. I will sorely miss him when he goes.

5. It created The Office. Many Americans don’t realize this, but NBC’s hit comedy, The Office, is actually based on a BBC television show by the same name. (As Ricky Gervais – its star and co-creator – was quick to remind us at The Golden Globes recently. Read here for a terrific comparison of the two.) I love the American version of The Office. But there’s nothing quite like the mixture of humor, pathos and off-beat romance that defined the original series – it’s almost unbearable to watch at times. And Thank Goodness.

For those who are interested, I’m over on PoliticsDaily.com today talking about efforts to improve the enfranchisement of overseas American voters.

Image: Empire Awards 2008 by Claire_h via Flickr under a Creative Commons License.