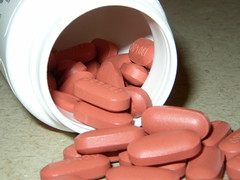 There’s a new study out suggesting that more than 60% of Americans go on-line to get their health care information. Whereas in the past, they might have called a doctor, relative or good friend for advice, these days people are reading blogs, listening to podcasts or posting comments, often relying on user-generated information.

To be sure, there are downsides to this trend. Pressed for time, some people are likely to try to use social media as a way to avoid actually seeing a doctor. A friend of mine likes to joke that he now just takes a photograph and emails it to his doctor with the subject line: “It hurts here.”

Over-reliance on the internet can also lead to over-reactions. Try plugging the words “red rash children” into Google. It comes up with about 99 different potential causes, ranging from Leukemia to a minor skin irritation. Guess which one you’ll gravitate towards?

Then there was the time I thought I’d over-dosed on Ibuprofen. I’d been having trouble – again – with Piriformis Syndrome and lost track of how many pills I’d taken in one day. I leapt to the computer, Googled “Ibuprofen” and discovered that adults are only supposed to take something like 1600 mg a day. I’d already had at least 2000. My heart started racing and I frantically reached for the phone to call 999 (911). I was convinced that I was going to die. (Never mind that the dangerous side effects of Ibuprofen run to digestive – not coronary – matters.) By the time the ambulance arrived, the medics practically laughed in my face.

On the other hand, I think there are a lot of upsides to this trend as well. I’ve had friends use the internet to correctly identify serious illnesses whose symptoms had flummoxed their doctors.

In a thoughtful article in the New York Times last week, Pauline Chen (M.D.) talks about how blogs, Facebook and Twitter have been instrumental to her practice as a physician. Among other things, they’ve helped her and other doctors like her monitor patients, share information, widen illness support networks or just provide a quick word of encouragement.

And yet, ironically – as Chen notes – there are very few guidelines in this information age for doctors about how to use social media with their patients.

Call me crazy, but as long as we’re about to plunge in and try and totally re-configure our health care system, shouldn’t we be thinking of how social media might be used to further the goals of medicine? If nothing else, it’s free. Which is more than you can say about most things right now.

What do you think? How has social media shaped your experiences with medicine?

Speaking of middle-aged technical blunders, the Onion has a hysterical article about the creation of after-work centers for the middle-aged. My favorite bit:

When not scheduling a Julia Roberts movie night or field trips to Gerald Ford’s birth site, the staff at The Den is busy showing patrons how to set up their AOL accounts and download MP3s of Sting’s latest album…

Image: P2090106 by Bright_Star via Flickr under a Creative Commons License.