Being Open To New Experiences: Not Everything Is A Lima Bean

Being Open To New Experiences: Not Everything Is A Lima BeandelialloydNovember 30, 2009March 15, 2021 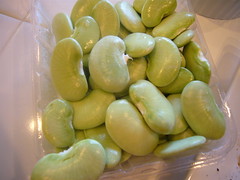 I always tell my son not to pass judgment on anything before he’s tried it out. Whether it’s lima beans or cricket, he isn’t allowed to say that he doesn’t like something until he’s given it a fair shake.

Lately I’ve been telling myself this as well.

You may recall that a few months back, my son started a new school. And while I was very excited for *him* to make new friends…take new classes…heck, even to don that new pink (!) tie,I decided ex-ante that *I* didn’t need any new friends. Sure, I planned to attend all the parents’ evenings and concerts and do playdates and what have you, but for me it would all be strictly business. (Or possibly good blog material. Because, let’s be honest, it always is.) I just…Didn’t. Need. New. Friends. Damn it!

I’m not exactly sure where this militant anti-social attitude came from. After all, I’m an extrovert. I love meeting new people and will happily chat up just about anyone in just about any situation. My husband’s the same way. But somehow, when faced with a new social environment that was somewhat different from the one I’d been hanging (comfortably) in, I got all defensive…and judgmental…and uptight.

And then a funny thing happened on the way to becoming a wallflower. I went to a holiday party – and had a really good time.

Sure, as I wandered in and was blinded by all the glittery cocktail dresses, I realized that I was woefully under-dressed and should have consulted LPC about what to wear before I left. And I’m fairly certain that I was the only woman drinking beer.

But I had at least three or four conversations that I really enjoyed, including one with a Jewish guy – married to a fellow Shiksa. We jointly bemoaned how hard it is to find a synagogue in London that is truly open to “patrilineal” Jews – i.e., kids where only the father is Jewish and who thus don’t technically “count” as Jews. (FYI: Lately I’ve been eyeing the Gay and Lesbian synagogue here, despite being neither gay, nor lesbian, nor Jewish. But I’ll leave that for another blog post, speaking of material…)

Then I went to a birthday party over the weekend and had this same experience all over again. This time, I ended up talking to a couple with a child at the school for about 45 minutes. The husband was English but had grown up in the States. He and I bonded over how Americans take it for granted that you get involved in your children’s school, whether coaching (as he does) or raising money (as I do), whereas for the Brits that’s still largely anathema. The wife was Indian and she and I bonded over what it’s like to be a foreigner at a predominantly English school.

The moral of the story, I suppose, is that even as adults, we need to be open to new experiences and “give them a go” as we say on this side of the pond. Not everything is a lima bean. New experiences can be fun. New people can be stimulating. And most importantly, as a friend of mine put it so succinctly: “Not everyone is an *&%hole.”

Hard to argue with that.