Tips For Adulthood: Five Ways To Make A Move Easier 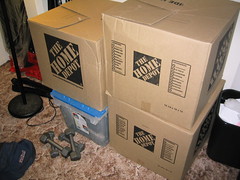 I mentioned yesterday that we will soon be moving.

Did I mention how much I absolutely *hate* moving? If I had my fictitious wife, I think I’d put “orchestrate all moves” at the top of her list of duties.

Not everyone feels this way about moving. I think it’s a great example of something where there are just two kinds of people. One friend of mine, for instance, loves to move because it enables her to throw away all the things in her house that annoy her. My husband doesn’t actually mind it either. It gives him an excuse to re-allocate our many gadgets within an entirely new space. (Aha! So the Dustbuster really *can* fit on top of the television! Whaddya know?)

But for me, moving is the very embodiment of hell. So if, like me, you dread moving house, here are five tips to make the process easier:

1. Get boxes beforehand. Lots of them. This sounds obvious but it’s amazing how many boxes you need to carry out even a small move. Fortunately, after all of my work on the PTA soliciting donations from various local businesses, most of the merchants in my neighborhood on a speed-dial relationship with me already. So I don’t foresee a problem obtaining boxes when I need them. But if that weren’t the case, I’d begin collecting now. Buying them from Mailboxes Etc. really adds up. Trust me!

2. Make a Change of Address List. Right now – while you’re thinking about it – sit down and make a list of every possible place that needs to know that you’re moving. Not just obvious places like your kids’ schools and your doctor’s office, but all of your frequent flyer programs, any utility companies who send you a paper bill, your grocery store if you have food delivered, and especially your local voting authority. There are way more than you think.

3. Declutter Now. I’m not a natural de-clutterer. I tend to favor putting things into neatly stacked piles, only to ignore them until said pile topples over under the weight of freshly sorted material. And particularly with this move we’re about to embark on, it looks like we’ll be moving into a considerably larger space. So it’s really tempting to just hang on to that PlayMobil Castle and all its attendant turrets, even though my son hasn’t played with it for years. But that would be a huge mistake. Because there are so many things – clothes, toys, kitchen aids – that we simply don’t use and must go buh-bye. (Unsure of what to toss? Here are 8 specific tips from the decluttering guru, Gretchen Rubin.)

4. Have someone else pack for you. Sadly, we can’t afford to pay someone to pack up for us this time round. But I have done that twice in my life and my husband often comments that those may well have been the two happiest days of my life. (Too bad all I owned at the time was a suitcase, a guitar and a futon, which did take a bit of zing out of the pleasure, it must be said.) But there is *nothing* like having a couple of people whisk into your house and pack up your belongings while you sit there sipping a cup of tea with your feet up.

5. Buy some Xanax. Really, just do it now. You’ll thank me later.

Speaking of moving, Aiden Donnelly Rowley had an interesting post over the weekend on Ivy League Insecurities about what it’s like to sell a house and that bitter-sweet feeling that accompanies the open house. Have a look…

Image: Packed Boxes Upstairs by Arthaye via Flickr under a Creative Commons License.