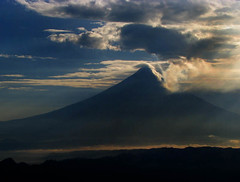 When last we met, I was on my way out the door for a glorious family vacation in the Loire Valley. While away, I had thoughts of coming home and posting on the lovely chateaus that we saw, the cool troglodyte dwellings that we visited, with a few gestures to French cuisine, bien sûr.

Oh, that is soooooooo 10 days ago.

Because shortly after touching down in my lovely adopted home, my country of residence became engulfed in a crisis of volcanic ash. It has paralyzed air travel for the past five days and has wrecked havoc on the economy, the schools, heck – even the flower stalls. You can read all about the volcano’s wider consequences for Britain on my post over on PoliticsDaily.com today.

But since we’re here now – and this is a place I sometimes come to vent, I thought that you might permit me a few moments of wingeing (to borrow a phrase from my adopted country.)

I think I first knew that I was in trouble when my husband and I went on our first “date night” (no, not quite of the Steve Carell/Tina Fey variety) last Thursday when this whole volcanic ash thing first erupted (no pun intended). We had miraculously won a free room in an upscale hotel in London for a night, and carefully arranged to book our room on a night when my mother would be visiting so as not to incur undnecessary babysitting fees. So far, so good.

But by the time we got down to the hotel that evening to check in, we were told that because of the volcanic ash, the hotel had only double bed still available, and it was on the smoking floor. The other rooms were all singles. Note: this is the *third* night that my husband and I have spent together without our kids in nine and a half years. Not exactly what we had in mind. (As it happened, the room itself was OK but the hallway required the use of a gas mask.)

And things went downhill from there. You see, everybody I know is stranded somewhere right now. I’ve been getting Facebook updates all day from friends who are in Rome, Dubai, San Diego, The Algarve or never even managed to leave London because of this thing. In our case, it’s my mother who’s stranded. She was scheduled to leave London this past Saturday. They are currently telling her she might get out *next* Saturday.

Which would be fine, of course, except that we’re about to move. So in addition to all the boxes and check lists and endless organizational trivia that accompanies a move (I finally got the official change of address form from the Post Office today!), we also have a house guest. Thank goodness she likes to read a lot.

So, all in all, I’m feeling pretty stressed (unlike this lady in the New York Times who seems to have taken her inadvertent London vacation in stride.)

Which brings me back to France (as all things eventually must.)

When we got off of the Eurostar in Paris, we were greeted by the news that there was a rail strike in the country that would affect most major rail journeys for the duration of our trip. And – true to form – we not only missed our train to the Loire Valley, but had to wait three hours for the next train, where we literally sat in the aisles all the way down to Tours.

As Americans, we aren’t really used to powerful labor unions. It’s just not part of the political fabric of our country in any meaningful way. So we were perplexed, outraged and vocally fuming about this massive and unforeseen change to our trip.

In France, in contrast, strikes are a part of life. They happen all the time. And while they may annoy and inconvenience the French, they don’t fundamentally get to them. “Ce n’est pas gràve” is a phrase one hears quite often.

And it was true. Instead of moaning and complaining throughout the course of this incredibly cramped two-hour journey, people were smiling, chatting, and drinking wine. They just weren’t treating it as “gràve.” And the more I watched them, the more I realized that they had the perfect attitude towards this whole mess. Why feel lousy over something you can’t control? There’s no point.

I’ve been thinking a lot about the French since the volcanic ash crisis took over my life a few days back. And every time I feel myself wanting to rage against the machine, I try to remind myself “Ce n’est pas gràve.” And it helps.

Plus, I just feel more French when I do it.