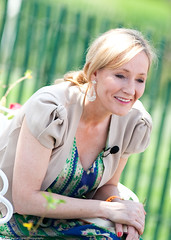 What’s not to love about J.K. Rowling?

The best-selling, mega-successful author of the Harry Potter series has always been a winner with the public. She’s wise…she’s modest…she’s even funny. (If you’ve never heard her commencement speech at Harvard University a couple of years back, drop whatever you’re doing and listen to this…)!

But most of all, I think we all deeply respect and revere this one-time-welfare-mom who decided one day in her mid-30s while working as a divorced secretary that she would take a chance on a dream and create what would eventually become the first of a series of books that has defined a generation.

But Rowling outdid herself this past weekend when it was revealed that she had secretly written a crime novel under the male pseudonym of Robert Galbraith, a (purported) first-time novelist. The book, The Cuckoo’s Calling, had opened to high critical praise when it was published in April, but had failed to attract much in the way of commercial success, selling but 1,500 copies.

Until now. Within hours of the revelation that Rowling was the actual author (an editor at Britain’s Sunday Times was the sleuth), the book rocketed to top the Amazon best-seller charts.

Read the rest of this post at The Broad Side...

Image: 100405_EasterEggRoll_682 by Daniel Ogren via Flickr under a Creative Commons License

Why I Won’t Be Celebrating the Platinum JubileedelialloydJune 2, 2022June 2, 2022

I bear no ill will against the Queen and wish her a long life. But...