Towards A Definition Of Adulthood (With A Nod To Judaism) 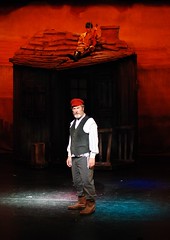 Over on The Happiness Project today, Gretchen Rubin is grappling with how we use vocabulary to define our goals.

Some people, she notes, prefer to talk about intentions rather than Gretche’s preferred “resolutions.” Others would like to discard the term “Happiness Project” altogether; while embracing the same goals, they want to dissect “life’s journey.” Still others don’t want to talk about happiness at all; they’d rather achieve a state of joy.

It’s an interesting discussion because it gets at the power of words to convey something essential, as well as how personal that vocabulary needs to be to have meaning for each and every one of us.

The post really struck a chord with me because – like Gretchen with happiness – I feel like I ought to have a working definition of “adulthood” on this blog. On my “about” page, I talk about adulthood as a journey, not a destination. And that’s very much how I think about it.

But last week, I was actually handed a definition of adulthood that really resonated and so I wanted to share it.

I came across this definition while viewing a rough cut of the fabulous film, Neverbloomers, by the Canadian filmmaker Sharon Hyman.  Some of you may remember Sharon as my E-BFF whom I met a year or so ago when I happened upon her website and realized that she was a comrade in arms. Sharon is in the process of finalizing her documentary, which is all about what she calls “GrownUphood” (love it!) and what that term means to different people (including herself).

There were lots of things that struck me about this film (which I can’t wait to promote up, down and sideways when it comes out later this year). But for now, I don’t think I spoil anything by revealing that in one scene, Sharon interviews a Rabbi about his views on adulthood. And here’s what he says:

“Being grown up,” he says, “is the ability to fully integrate that which we know, practically.” He then goes on to reference the Kabbalah, which has a Hebrew word for this: daas. According to the Rabbi,”daas”  is usually translated as “to know,” but it also means “to connect.”

So for this rabbi anyway, adulthood is a state in which all the knowledge that we possess connects or “clicks” and becomes an integrated feeling which, in turn, influences our behavior. And the intellectual faculty that allows for such integration is a uniquely adult talent which one only develops later in life.

Not to go all Fiddler On The Roof on you (“The Rabbi has spoken!“) but I love the concept of daas. I feel like it goes to the heart of what we are – all of us – going through as we age: a process of integrating and connecting our knowledge in a way that permeates our feelings and our behavior. At a minimum, I feel that this idea very much encapsulates what this blog is all about.

So that, my friends, is my profound thought for the day, courtesy of Rabbi Moshe New in Montreal whom I’ve never even met.

You see, I told you. I was meant to be Jewish after all.

Here is my very last post for Politics Daily, which, quite sadly, shut down earlier this week. (More on that another time.) It’s a post on Social Networking and Local Government. I enjoyed writing it every bit as much as I’ve enjoyed writing all of my posts there. Vaya con Dios, PD.

Image: Fiddler On The Roof: Tevye and the Fiddler by Thwaites Theatre Photos via Flickr under a Creative Commons license.

Why don’t we make a deal where one of us is put in charge of...